Remember the Magic of Santa? 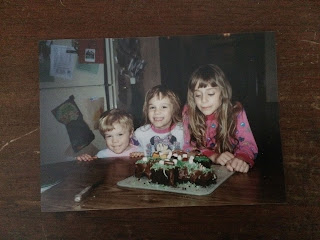 Kyle, Emma, and Jessica, smiling over a home made Christmas tree cake.  Photo taken by Elena Lewis.  I took a picture of a picture to add to this story.

So was I just a gullible kid?  Well yes, but it was more than naivety.  I kept believing in Santa because I liked how it felt to believe in him.  The child like wonder and sense of possibility made me feel special.

As a quiet, nervous child (and adult) I spend a lot of time trying not to be noticed.  Attention= …bad things.  But lack of attention has its own frustrations.  I spent a long time watching children get credit for deeds I did every day without a hint of recognition.  Other children and adults may never see me, but Santa did.  He is always watching, and I was on his good list, so someone somewhere knew about all my hard work and valued it.

And those bad kids that seemed to get away with every cruel thing.  You know the ones with ugly smiles, taunting words, and a thoughtless push.  Well, they’d get coal.  Something to say, “I know what you did and I know deep down, you aren’t good.”

As I aged, there were doubts, but I wanted Santa, so I created stories and games that helped preserve him for me and my siblings past the natural expiration date such belief holds.

We did normal things, like write letters to Santa or stay up late and try to catch him in the act.

One year we came home to plastic reindeer toys under our pillows and our parents said “It’s so late, Santa must have stopped by, realized you weren’t home, and left this to warn you you needed to be in bed by the time he stops by again if you want Christmas presents.”

I think my parents wanted us to go to sleep quick, but this visit had the opposite effect on me.  I was alive with possibility.  How does Santa map his trip?  Does he stop by the same time each year?  Why couldn’t he leave the toys for us if we were not home?  The stories!

That year I added to our childish Santa myth.  We stayed up late, but in our room with the lights off.  Each bump and shake of our old house was Santa and the reindeer on the roof.  Did he know we were home but not asleep yet?  Was he waiting for us to get in bed and close our eyes?

Next year I instigated the “Santa’s Helper” program.  All three of us became “elves in training” without own special sleigh bells.  The point of the program was to spread cheer and good will through selfless deeds like reaching out to charities, being considerate to each other, and looking for kids less fortunate to do something kind for them.  The secret part of the club involved a bunch of secret missions from Santa we had to fulfill, and different signs we were closer to our goal of “elf.”  I claimed a secret communication with Santa through “phone calls” and “notes.”

How did me faking a secret agent like program where Santa was the “Charlie” of our “Charlie’s Angels” like group keep my belief in Santa?  As the person who made it all up, I should know it’s fake right?  But that’s the beauty of a child’s brain.  I could be aware both that I was making it all up and also believe there is a Santa and I was doing his work.

My goal as an Urban Fantasy writer is to bring you back to that time when Santa could have been real.  An adult “Santa’s Helper” club.

How do I manage that?

In “Follow Me: Tattered Veils” ground the story with a strong sense of place.  You can visit all the locations mentioned in Huntsville, Alabama.  All lies need truth in them right?

But I’m dedicated to the experience.  I commit to a sense of seasonal time too.  “Follow Me: Tattered Veils” begins in January and ends on Halloween.  As seasons change and time passes, I reference temperature, weather, and even which flowers bloom. Where and when the characters remain constant so readers feel confident in their sense of place.

My characters are everyday humans filled with flaws Joe and Jane everyman has.  They struggle with money, job satisfaction, friendships, and addictions.  Not a major or minor character stands without a rounded soul, capable of being on Santa’s “naughty or nice list.”

I introduce more fantastic elements gradually.  It starts with religion, an element of magic many adults accept, but I build from there to less “real” experiences.

I hope by the end of the journey your sense of reality undergoes changes and you’re left wondering.  Is there more in this world than the mundane?  Could Santa or something like him be real and is he always lurking just beyond our perception?

Like this, there's a whole series!  Check out  Closet Monsters: Gone too Far?and Garden Gnomes and other Evils for more childhood stories. ^_^

Want to know more about my novel?   Check out my series where I find similarities between my novel and other popular media.  Hopefully it gives you a better idea whether there are elements in my book you may enjoy.  Lost Girl Comparison, American Gods Comparison, and The O.A. Comparison.

Want more information?  Check out my website jessicadonegan.com and subscribe for updates.
Posted by Jessica Donegan at 12:26 PM