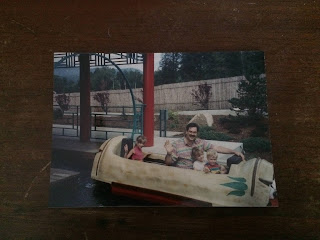 
Remember when the closet monster was a real prospect?  There are many varieties of the beloved creature.

First is the tidy child’s monster.  Their closet door presses shut, but somehow in the shadowed night, the door looms like a dark doorway, waiting for brave children to traverse to a realm of unspeakable horror.

Next is the messy kid’s monster.  They shove their toys into the closet at the last minute, and the door never quite closes.  Frustrating in the day when they try to convince their guardians the room is clean and can they please go out and play.  At night, the door gapes open, a toothless maw.  The dark beyond is bottomless, any evil could await them.

Third is the run down home’s monster.  This closet door never fully shuts.  Maybe the hinge isn’t lined up or maybe the door lost its latch.  No one cares about the why.  These children go to bed with a closed closet door, secure in their knowledge that nothing will harm them and wake up for water or to use the restroom, to an open door.  They race for the light and throw the switch like a medic to a defibrillator.  The world is incandescent, but it’s too late.  Something old and terrible lingers.  No light or company will ever make what crawled out of the closet go back in.  Creaky floorboards are its footsteps, drafty windows become its breath.  Whatever that thing is, it’s living in your house now, and there’s no way to exorcise it.

The closet monster fascinated me.  How did it creep in at night and why did so many children assume it fled in the morning?  Does light hurt its skin like a vampire?  Does it sleep during the day like a bat?

And what did the monster want?  Was he guarding something on the other side of the darkness?  Did he eat socks, is that why I could never find matching pairs?

“Yeah you know, take kids.  He got my younger brother,” he said.

“No you’re the youngest brother!  Everyone says so,” I said.

My siblings and I were hooked.  Yes, the closet monster lived in everyone’s home, but my grandparents' home, became its main den.  When we were there, we hunted it in cupboards, basements, and closets.  Why, because there was a missing uncle we might save.  Even if that uncle was long gone, we could at least “get” the monster back and keep it from ever taking another child.  Bring the fight to its home and all those great metaphors.  As eldest, I was good at rallying the younger ones to a worthy campaign.

And my uncle played his part.  He’d hide in basements and closets waiting for us and then roar and grab us.  We’d charge the monster and hit it or kick at it and he’d let the trapped sibling go and we’d run out, believing we’d narrowly escaped the monster’s clutches.

As I grew older, and began to understand the game we were playing, I added new rules to keep my siblings believing for longer.  We would use flashlights and “light” formations to keep the monster back.  In reality, my uncle couldn’t sneak up on us if we all used our flashlights together, but the reasoning I gave was that the monster’s eyes were photo-sensitive.  The light blinded it, giving us time to move past it.

When one of my siblings would doubt the closet monster’s existence, I’d dare them to go in alone to the closet.  There in the dark my uncle would shake clothes hangers and growl, stomping closer and further away.  The terrified sibling would go to the door and try to open it, only to find it stuck closed (I was barricading the door).

They’d scream and plead for help and I’d say things like:

“It’s sealed the doors, I can‘t open them!  I think it’s mad you don’t believe!  Quick say you believe in it before it gets you, maybe then the door will open!”

My sister or brother always agreed.

And I’d let them out.  We’d go eat cake, because sweet things help you recover and then we’d play in the sprinkler, because the monster can’t get you outside.  It hates fresh air.

So how do I capture this dark childish terror for adult readers in “Follow Me: Tattered Veils?”  Instead of using an uncle to help make the monsters more real, I use old myths.  Stories told and retold in many time periods with different players but the same over reaching themes.  Hear the same story enough but different people and anyone will wonder— is this real?

And I use humanity’s limited scope of empathy.  I terrified my siblings, not just with stories of monsters, but actions that validated those fears.  I thought nothing of this fun game, but there was casual cruelty in the act.  We all carry a thoughtless capacity to scar each other.

Lastly, I use the closet monster himself.  Because the fathomless darkness where all kinds of good or evil could spawn lives in my heart and I think it might live in your heart too.  Don’t we all have a certain wardrobe we think might take us to Narnia or a certain set of words we think will release Bloody Mary?  “Follow Me: Tattered Veils” lives in a world where we investigate the wardrobe or we say the right words.  The roads to different possibilities open and I hope you’ll walk one of them with me.

Like this, there's a whole series!  Check out  Remember the Magic of Santa? and Garden Gnomes and other Evils for more childhood stories. ^_^

Want to know more about my novel?   Check out my series where I find similarities between my novel and other popular media.  Hopefully it gives you a better idea whether there are elements in my book you may enjoy.  Lost Girl Comparison, American Gods Comparison, and The O.A. Comparison.

Want more information?  Check out my website jessicadonegan.com and subscribe for updates.
Posted by Jessica Donegan at 12:35 PM