Real World Obsessions that Make it Into my Writing: Faith and Religion 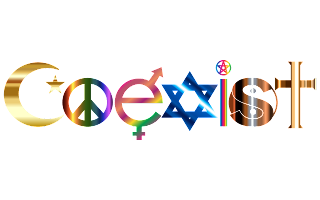 image from openclipart.org by GDJ


Confession time!  I am a religious zealot.  I mean all in, no turning back, if we ever speak about my beliefs, it is full in your face I am right.  And I have crazy rules/beliefs (all religions do).  My zealotry rarely comes up in conversation because part of my faith is that I believe proselytizing is one of the most heinous and immoral acts a person can perform.  It falls under an act of mental and spiritual violence and is an anathema.

My passion for faith structures and a more open religious community is more seen in my writing than in my conversations.  In my short stories.  Magic/divinity works in direct and obvious ways on my fictional worlds.

In “The Undertaking”, I have my main character, Nimgauna, go on a spirit quest to find her personal power.  This short story is a metaphor for what I think belief should be about: finding your personal truth.  Religion should be a personal journey based on your experiences that informs how your view the world and how you respond to challenges.  Ideally, you have a great guide advisor who has your best interests at heart.  They suggest, they don’t make demands on the outcome of the journey.

“The Undertaking” explores other religious elements.  It asks if the ends justify the means, and what kinds of ways can people be the change they want to see in the world.

Another short story I wrote, “Blood Moon”, introduces readers to what a real and working coven of witches might look like.  The people I introduce in this minority faith run the gambit.  Some of them are elderly, others work professional day jobs, and at least one of them struggles with their mental health/ability to function in a normal society.  The story descends into a horror/fantasy.  Someday, I’d like to write a follow up about all the different ways we as a society should have intervened so the conclusion of “Blood Moon” could have been cheery instead of dark and angry.

“Blood Moon” speaks to the frustration minority faiths have in a Christian-dominated society.  Pushed to fringes, questioned, always playing an ambassador of their faith, and forced to find fellowship in the “other”, even if it’s an imperfect union.


My novel, “Follow Me: Tattered Veils” has the most religious elements of all my stories.  If “Pagan Fiction” were a genre like “Christian Fiction”, that’s how I would describe the work.  It explores so many modern interpretations of paganism, follows a practicing pagan, and has the ‘fantasy’ element of a fae stalking and trying to capture Roxi.  Fantasy is in quotes because I am mirroring a lot of classic mythology in the book.
beings at work in our universe fascinates me.  “Follow Me: Tattered Veils” offers one look at what life might be like if these beings were more interactive with humanity.  It’s thrilling and terrifying.

Collectively, I spent months in researching folklore and different pagan beliefs.  I created a personalized religion for my main character, Roxi.  Devotion is her defining characteristic, and it forces Roxi to stand apart from everyone else in her world.  What does a person do when the beliefs they hold most dear isolate them from others?  Is her religion hurting or helping her?  I hope readers are asking these questions about Roxi and themselves.

So how do I sell a “Pagan Fiction” book to a Christian market?  Will the religious questing and pursuit come across to readers?  And even if people get it, will the minority faith structures be compelling?  Is it too liturgical?  I was eager to get into beta readers and learn what landed.  It felt like a big risk for me to write this “urban fantasy” where so little of the elements were fantastic.  The rituals and spells are all real and I portray the results so one might experience them in the real world (i.e. is that underwhelming to the typical fantasy reader).  The Gods and fae I portray are “real” in the sense that I extended their mythology.  I didn‘t give them new powers or different personalities/motives.  Every herb, gesture, and symbol has a wealth of history behind its choice.

It relieved me when the feedback came in.  My beta readers said “this is a deeply religious and theological book.” In retrospect, I shouldn’t have been concerned.  “Follow Me: Tattered Veils” wasn’t too narrow for readers to relate, and I could use my book to have conversations with other people I’d never dreamed of expressing.  It was magical.

Were their issues in the first draft of “Follow Me: Tattered Veils”, you bet.  Pacing, pacing, pacing.  A lot of setup in the front and all rollercoaster drops in the back.  It also turns out people want a little more exposition, or they want it in different places than I’ve dumped it.  The whole front third needs to be re-written and the most liturgical part of the book, a pagan meet up where many practicing pagans share opposing views, needs to transform because it’s not doing what it needs to do and it introduces too much that doesn’t matter in my book.

Can you read this book and never think about religion?  Absolutely!  “Follow Me: Tattered Veils” is currently 76,000 word book and explores a lot of themes where religion is just one, but you can read it as straight fantasy about a woman being stalked, abducted, and attempting to escape the clutches of a creepy obsessive fae creature.  What’s cool about Roxi being pagan: she’s an informed combatant.  She knows fae folklore, so she knows where to be wary and she has ideas of what’s waiting for her on the other side of the veil.

Talk to me.  What parts of your personality show in your writing?  Do you embrace those elements or try to downplay them?  Do readers notice themes and elements in your story, or is it a secret author Easter Egg?
Posted by Jessica Donegan at 10:20 AM