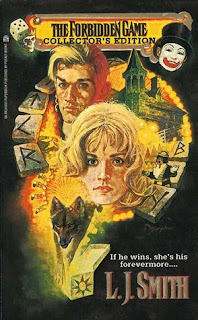 The original Forbidden Game book cover I picked up over a decade ago found via google. 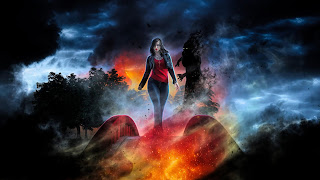 The Forbidden Game: A series by L. J. Smith about a highschool girl Jenny who's gained the attention of an immortal being, Julian.  After many years of watching over and protecting Jenny, Julian lures her and her friends into his world through a board game.  The group needs to make it to a tower before dawn to escape his clutches, but to do so they will have to each face their own worst nightmares.

Gerry, like Julian has an obsession for the protagonist, Roxi and Roxi, like Jenny, is unaware of Gerry’s obsession until he enacts his plan to capture her.  Both stories have a friend group whom the protagonist must save.  Both characters romp through a supernatural world that doesn’t seem to follow any hard and fast rules.

The better question might be why two separate books for what feels like very similar ideas?  It's hard to spell out the difference without spoiling each individual story, but I will try to hit some larger points.

Julian is portrayed in the first two books as an all powerful being.  He is far more powerful the the human protagonists.  However book three reveals Julian to be a young and far weaker member of his race.  Book three also shows that Julian, who is portrayed as lacking empathy or emotion actually has more than he revealed and is an emo kid compared to the elders of his race.

Meanwhile, Gerry is the king of the fae.  He is the most powerful of his people and expects praise, worship, and deference as his due.  Gerry shows emotion often, it isn't alway in sync with how a human would react to a situation but he shows joy, amusement, boredom, anger, and frustration to mention a full range of emotions.  There is no emotional moment where are tearful Roxi says something like "you don't care at all do you?" and Gerry smiles and shrugs, though Julian and Jenny get this moment multiple times in their work.

Jenny and Roxi are very different characters.  Jenny's popular, has a long term boyfriend, and still in high school.  Roxi is isolated and resents the society she lives in.  Jenny is used to people and systems that work for her while Roxi is more used to fighting for things.  This creates a harder protagonists vs one who can fall weepy at times.

Roxi is older than Jenny too.  At twenty-three she stands in the "adult" camp, though her actions indicate she has some emotionally stunted growth related to an unrevealed past.  Roxi sometimes acts with a younger character's immaturity but she never hesitates to take advantage of all the rights and privileges adulthood bestows.  She doesn't answer to parents or any other authority structure.

Jenny is attracted and repelled by Julian at the same time.  There is no romantic subplot between Roxi and Gerry.    Some of this may be a when it was written and who the works were written for situation.  There was a period in the 90s when a boy/ immortal being stalking you was considered very romantic, especially when written a certain way.  I never agreed, so I'm thankful that now we call this kind of story out for promoting unhealthy creepy behavior.

The Forbidden Game is a young adult series, a good one adults may also enjoy, but the story beats, the scares, and so on are geared for a fourteen to seventeen audience.  Follow Me: Tattered Veils is geared for a new adult audience.  The situations, scares, and story beats are all for a more mature audience.  I think if you like one series, you'll like the other too.  And I'd love to do a more detailed post comparing and contrasting all the little tidbits, but I don't want to spoil a novel I haven't released yet!

Did you love The Forbidden Game?  Were any of these elements you loved?  If so consider picking up Follow Me: Tattered Veils when it releases in February.  Check out my website jessicadonegan.com for more details.
Posted by Jessica Donegan at 9:56 AM