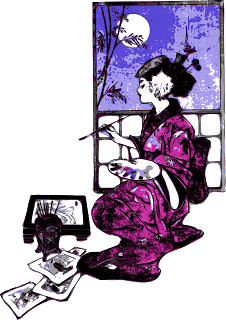 
"I hate calling myself an artisan," the woman tells me.

I smile and nod because I think I understand.  Her ego is properly sized.  Calling oneself an artist of any kind seems pretentious to her.  It's an old story I'm ready to hear again even as I envy her the creative freedom, her ability to work from home, and the liberation from someone else's schedule set.

"I hardly call working on the same thing over and over again for 14 hours at a time an artisan thing," she continues.

My world halts.  The gears of the world pause for a moment as I consider her words.  It's never occurred to me that artisan could be the same as a small scale sweat shop.  I never considered that seamstresses or woodworkers even chose to make the same piece over and over again until it lost whatever little bit of soul it might have once had for the creator.

And I wonder is she as positively happy as I'd assumed anyone would be if they were "following their passion" or "had a skill that the market would support her to pursue".   As a thinker, a writer, and a researcher, I often envy others skills.  Even people just societally considered half a step above me like the artisan.   They after all, they can do what they love full time.  They must be deeply engrossed while I'm here behind the coffee bar handing off lattes and listening to small children tantrum while flustered mothers try to shop.

I'm so bored and quietly miserable--but here's the stay at home artisan in front of me and she's lonely and isolated.  Her hands hurt and her parents worry about her--just like mine.  She doesn't have time to explore interesting projects she'd like.  She just follows trends and has to keep making what is selling.  Yeah there are no screaming children and the rude people buying her stuff are in a store away from her--but she goes days without seeing another soul beyond her husband.  She's so busy at home that she can't cook a fresh meal.  Hot pockets are their go to lunch dinner and breakfast.

And I look at her--really look at her.  She's unkempt.  Her colored hair has about 5 inches of growth, it's falling down from it's low bun into a loose unruly mess.  Her black zip up sweat shirt is tattered, covered  in frayed edges, loose strings and random stains. There are bags under her clean make up free face.  Her build is sturdy but her husband stays close--is she about to fall over on her feet exhausted?

I see suddenly that we could be in the same place.  I write and I research for me and for art (which is so presumptuous to put down it makes me nervous to type) .  It's not my bread and butter.  How amazing would it be if one day  I wrote something took off and made money--but it's a distant dream.  I don't alter my writing to make it more marketable, not really.

Did she start the same way, making things because she loved it?  Did one or two things take off--forcing her to keep making more and more of the same thing over and over again because that's what people wanted?

This is how capitalism destroys us.  Here she is living what should be a dream, and other than scale, the work hours and some of the conditions are little better than sweat shops.  Does she work this hard to keep up with demand or because she needs to sell this much to keep herself a float?  Is this how she wants to live deep down and she's just hunting for some sympathy from me?

And here I am brewing her coffee and smiling all the while.  I'm only half listening to her, my mind is off in deep thoughts about what else I'll write for various blogs and whether or not my main character in my novel should show vulnerability and weakness.  I have her drawn up as an distrusting fight first kind of woman.  She's dragged along by her friends into a host of environments she finds distasteful--and I'm wondering if she needs to fall, even as she protests, to some of the dangers inherent in the scene.  Part of me doesn't want to open her up to the loss of control--as that's largely what I like about her--and part of me feels like it's so inevitable that people lose control in that the point of her succumbing would make that impact loudly and dramatically.

And how is me working on these elements in a book inherently less valuable than standing around in a coffee shop making small talk about the weather and other peoples' jobs?   Does everyone else in the system not feel as small and constricted as I do?

These are the questions we should be asking our culture and our society.  Are the things we value in line with what the culture demands for survival?  How do we define value or work?  What does it take to be more than a corporate cog--if one so desired--and is it feasible?
Posted by Jessica Donegan at 8:28 AM